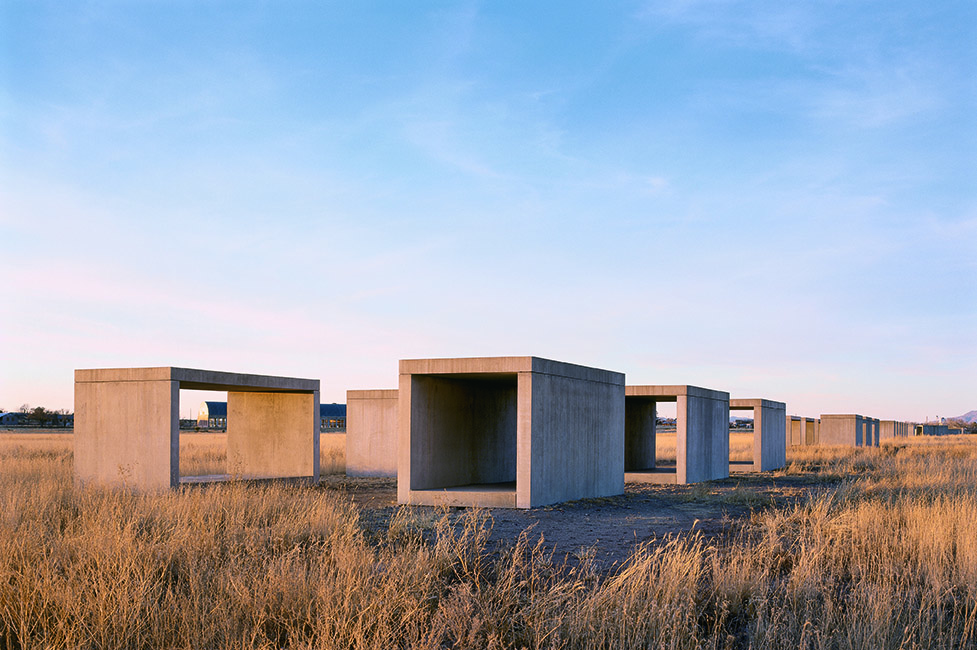 Expansive; in a word, that is how best to describe the vast land that careens outside one’s window while circumnavigating Texas. It is also a visual equivalency for the amount of influential modern and contemporary art which Texas contains, and which any art aficionado would do well to see. While the Texas Contemporary in October and the international Dallas Art Fair in April are opportune occasions for familiarizing oneself with art in Texas, a comprehensive experience of the significant modern, minimalist, post-structuralist, and site specific art in Texas is best experienced as an art-cation in the place of it’s original culmination; Marfa, Texas.

A quintessential western town known for it’s sparsity, obscurity, and a-temporal coolness, Marfa is a singular location best known for it’s concentration of significant minimalist and post-structuralist works. Home to the Chinati Foundation, founded by Donald Judd in 1986, and which houses a vast collection of major works by Dan Flavin, Claes Oldenburg, Carl Andre, and Richard Long, among others, as well as the Judd Foundation and interdisciplinary Ballroom Marfa, this small Lynchian West Texas outpost is a coginscenti’s dream vacation for early-post modern splendor.

Here is what to see:

Located in the arid Chihuahuan desert, the Chinati Foundation maintains an impressive modernist collection that is housed in fifteen buildings over 340 acres of west desert land. With a changing special exhibition program culled from their archives, Chinati is also home to an incredible array of permanent site specific works including; Donald Judd’s Untitled (15 works in concrete) 1980-84, Untitled (100 works in aluminum), 1982-86, Dan Flavin’s enigmatic Untitled (Marfa Project), 1996, and David Rabinowitch’s Elliptical Plane in 3 Masses and 4 Scales, 1971-72.

Housed in a former nineteen-twenties dancehall, this non-profit arts foundation maintains a stellar changing exhibition program of both emerging and established artists, but is most readily recognized for the inquisitive and hyper-contemporary performances and film screenings it puts on. This summer alone, Ballroom Marfa will be screening Through the Repellent Fence which follows art collective Postcommodity, and Serpent Rain, an experimental film collaboration between artists Denise Ferreira da Silva and Arjuna Neuman nominated for this year’s Artists Film International.

Established October 1, 2015 by artists Elmgreen & Dragset in cooperation with Ballroom Marfa, Prada Marfa, a pop architectural land art project, has become synonymous with the place itself, albeit being located exactly 35 miles outside of town near Valentine, TX. Modeled after a Prada boutique, the experiential installation houses a number of luxury goods from the fashion house’s 2005 line but is sculptural in nature, and does not have opening doors or any commercial value. It is a landmark must see while in Marfa.

Comprised of Donald Judd’s work place, multiple studios, private residence, and his personal library of over 13,000 books, the Judd Foundation is one of the greatest assets to Marfa as an art destination. The foundation meticulously maintains and exhibits an extensive collection of Judd’s early paintings, writings, furniture designs, and site specific sculptural works, in addition to Judd’s own collection of prominent early twentieth century artists and designers he admired. It is a veritable goldmine of early modern art and architecture, and could easily occupy an entire weekend in town.

Across the street from the Judd Foundation offices, the Hotel Saint George is a contemporary iteration on the influence of Judd is Western architecture. Designed by Houston based architectural maven Carlos Jiménez, and outfitted with custom interior designs by Marfa based Joey Benton, the hotel stands where the original Hotel Saint George was built in 1886. The latest rendition smartly incorporates the original 1920’s features with works by contemporary artists in Marfa. A smart and evocative culmination of Marfa artistry past and present, the hotel is a mandatory experience for visitors – if only for a cocktail at Bar Saint George.