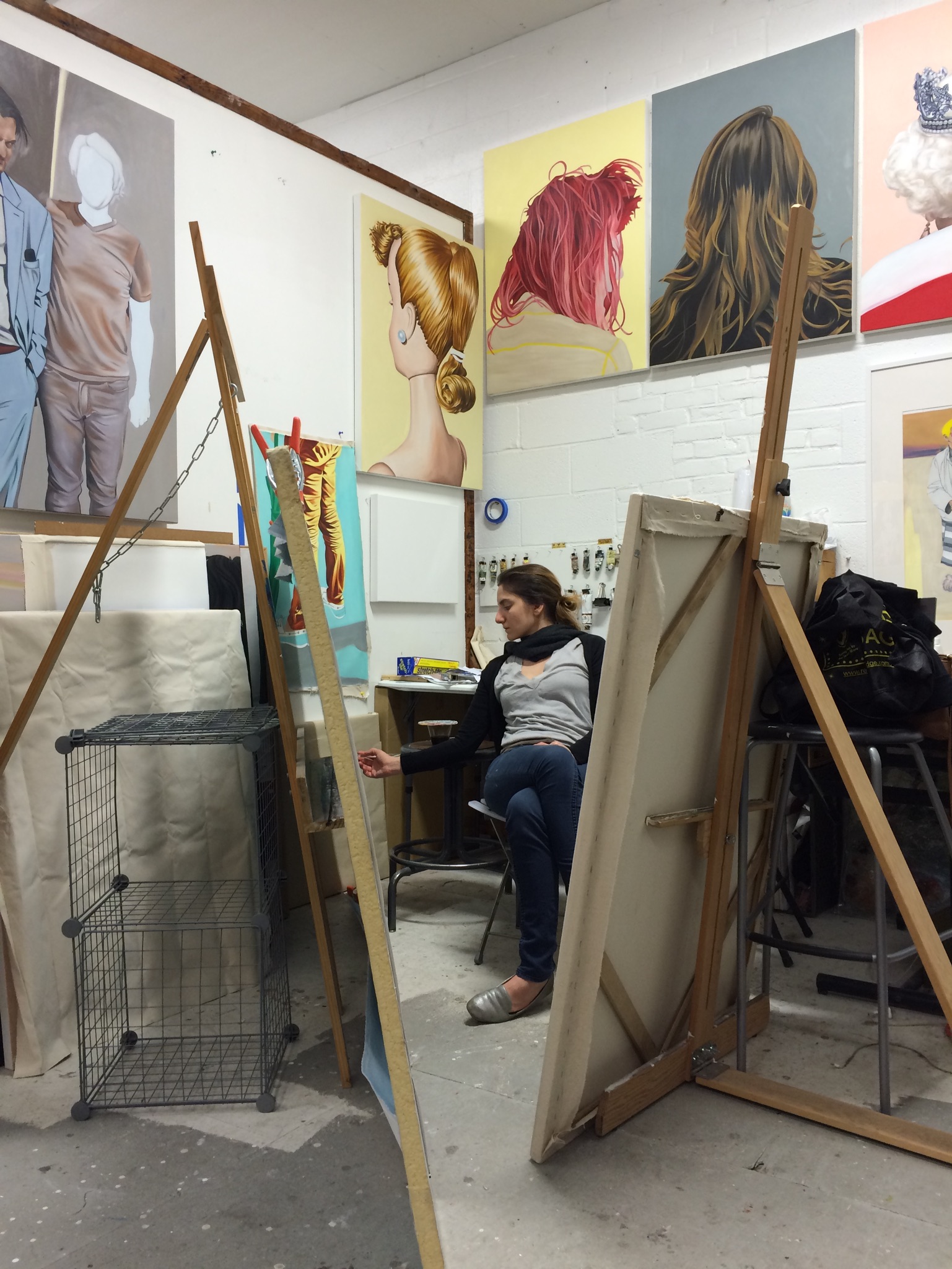 Artist Kathryn Mecca in her studio. Image courtesy of the artist.

Lafayette, Indiana and Jersey City based artist Kathryn Mecca takes an unconventional approach to portraiture. Our team had the opportunity to chat with her in advance of the Seen/Unseen show featuring work by her and Tom Day. Kathryn discusses how she’s using a smaller lens of focus to show viewers more of her subjects than ever before.

On the evolution of her style

“As an undergrad, I’d always been thinking about the same themes in my work; always interested in the figure. But when I first started, I was actually very interested in more gestural painting. You know like Lucien Freud and Degas. I was very into painterly painters and over time I became much more interested in the simplified painted image.
I’ve always been interested in people and different ways of looking at people and different ways of describing people– thinking about people. With studying sociology and psychology, and with such an interest in culture and how people interact, how we present ourselves to one another, and how we perceive one another, it’s just a genuine interest of mine.”

“I’ve always wanted to question how we perceive one another and what different presentations of a subject reveal about its audience– Particularly what simplifying a subject does, if it allows a [clearer] idea of the person or an easier way for us to understand the information we’re looking at when we’re given less information. By cropping and zooming in I’m both alienating the viewer and making it more intimate for them. I like to explore that difference and what it creates. It alienates because you’re not given everything; you’re not sure what you’re looking at- It’s a lack of information. One [example] is the Barbie paintings, the back of the head paintings. To start with, you’re given the back of the head, so you’re not seeing a face. You’re given very little information and its heightened with the Barbie because these paintings are larger than life size. So, it’s this big plastic Barbie that look like it’s almost going to turn around and look at you. That’s not real and not only is it not real, its huge. So it’s just interesting to think about. Sometimes I do it with artificial coloring in the paintings. All of the paintings have [unrealistic] color. And its the same idea of playing around with fake information, limited information and what that does.”

On the creative process

“I basically do two different things. I’m always taking photographs of people in public spaces. I have a collection and I am constantly snapping photographs. So its either from that, real people in the street that I don’t know, sometimes people I do know. Or its staged photographed that I’ll either take of a Barbie or photos of famous people found on-line.”

“I like really simplified portraiture from people like Alex Katz, David Hockney, Tom Wesselman and Luc Tuymans. There’s a show in New York at Petzel by the Artist Thomas Eggerer. He is also someone that paints about public spaces.  This most recent show was super interesting to me because its street surfaces. That was very inspiring. Installation artists are also really interesting to me. I’m interested in pushing my paintings more toward installation.
I’m thinking about different ways of treating the painting as a little more sculptural to start with, different ways of hanging them from the wall or ceiling with different types of materials on the sides and backs. I’ve been playing a lot with raw canvas, letting it hang and different ways of treating it. I have this one painting where I apply very thick gesso and it wasn’t stretched so when it hangs it has this very crisp edge. I apply the gesso very thickly but very smoothly. I don’t use a brush, I use a knife, so its super smooth, it has a very nice material aspect to it. It feels like skin, because it’s a painted person. It looks like treated leather. Also, I’ve been playing around with audio.”

On the portraiture in a digital age

“Its interesting that we’re often questioning it. The history of portraiture– there’s a reason for it. It served a purpose. Now you don’t need portraits of people. People still want them, people stull get something out of them They are still functional. Not necessary, but still really nice. People will always be drawn to portraiture regardless of function. It’s a timeless art form.  .

I love Instagram. I live swiping through and the instant gratification of the images, with not too much time invested, and I think you can see that in my paintings. There’s an overload of information at your fingertips and it feels good to simplify and think of one little thing at a time.

I wouldn’t say [its] positive or negative. I think it’s interesting and certainly very right now in the moment.”

How do you identify your subjects and what is your interaction with them? For those you don’t know, why do you chose them?

“It’s hard to say. Sometimes people just look interesting to you. They look like they have a story, a lot going on. They just catch your attention for one reason or another. Sometimes I may just be thinking about something for a long time — a shape or a color and someone just so happens to be wearing something like that or something different that I haven’t seen. You just never know what you’re going to see on the street and you don’t get to choose what you see.

Sometimes it’s just by the way someone is carrying them self. A bunch of my paintings are from a parade that I went to in Amsterdam and lots of families were there. Sometimes a kid is there with their parents and they don’t really want to be there. It’s the way the kid’s carrying them self that’s interesting, They’re interested in their surroundings. They’re embarrassed by their surroundings. They’re just trying to fit in. The interesting thing about the parade to me was how crowded it was, so it was easy for people to forget that they’re in public because there’s just so much going on around them. It’s that sense of being lost in the crowd.

I should also add the famous people that I’ve chosen as subjects. The whole thing is that you don’t really get to choose what you’re seeing and it really affects you. And just like you don’t choose the people you see on the street, you don’t choose who is being talked about in the news or who’s famous. I did that Kanye West which was a lot of fun because he was talked about a lot for a while. I’m going to do a Kim Kardashian painting also.”

On her upcoming work

“I’m starting a new series where I’m further simplifying the figure in my work and expanding more on the space it sits in. I’m emphasizing the objects surrounding the figure- the textures and objects around them, their shadows, it goes hand in hand with my exploration of installation.”