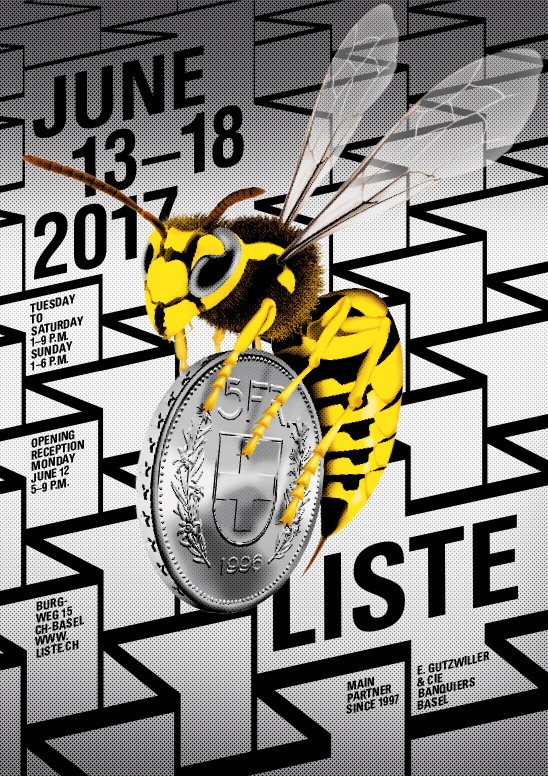 Art Basel, the acclaimed international art fair whose provocations in the art market are notable for their stylistic and commercial influence, premiered this past weekend June 13th – 18th in Messe Basel, Switzerland in usual blue chip opulence. Yet, it was the twenty-second year of Liste, the satellite Swiss art fair which runs adjacent to Basel, whose resonance will continue to reverberate throughout the market in coming years – particularly for new collectors.

Liste, since it’s inception in 1996, has evolved as one of the most important and unabashedly hip art fairs for burgeoning young galleries and emergent international artists. Founded by Swiss dealers Peter Bläuer, Eva Presenhuber , and Peter Kilchmann in an effort to democratize the economic and political exclusivity of Art Basel and other large international art fairs, whose stipulations and application fees often incidentally bar out young galleries, Liste exclusively represents galleries who have been in establishment for less than five years and exhibiting artists under the age of 40.

This year was no different. Introducing fifteen new galleries to it’s roster of exhibitors, including digitally evocative Société Gallery from Berlin, L.A.’s Jenny’s Gallery, and Southard Reid from London, Liste represented over 140 international artists from 34 countries. Disparate from the fastidious and sparse white booths at Art Basel, Liste unconventionally housed this year’s 79 galleries in a defunct brewery, replete with exposed beams, pipes, and inimitable lighting situations.

Granted, the edginess and invitation for experimentation that such a space denotes is part of Liste’s charm, and works well for sales. Seemingly in direct contrast to the downward trend art market sales have taken in the last two years, purchasing at Liste has been demonstrably thriving because of its lower-end price model and attention to experimental gallerists – curators and collectors alike are increasingly engaged in the political, challenging works Liste supports. Evocative artists such as Hannah Black, Samara Scott, and Amalia Ulman were well sought after this year.

This upward trend in sales is indicative for Liste’s historical eminence as a well curated place for solid investments in up-and-coming artists. Given its locality to Basel and dedication to underrepresented or “untested” art in the market, the caliber of exhibitors at Liste is often regarded by collectors as the place where the next generation of market stars are established every year. Collectors and curators gather here to discover new artists, not those whom they already know.

Investments in promising young artists and artworks at Liste frequently accrue great value as new artists quickly become internationally recognized and highly curated following their participation in Liste. It is not infrequent for galleries and artists who show consecutively at Liste to “graduate” to Art Basel within a short period of time, as New York’s Real Fine Arts and Berlin’s Kraupa-Tuskany Zeidler did this year. Notably, David Zwirner and Maureen Pauley were among the first exhibitors at Liste in its 1996 premiere.

As the alternative to the blue-chip scale of Art Basel, Liste is ever more evocative for it’s accessibility but also its market predictability – artists and exhibitors whose work sold this weekend are representative of the next generation of significant art market players. Particularly in the current climate, where galleries are increasingly prone to economic challenges and closures, Liste proffers a certain stability in fostering a new market for emergent collectors, artists, and curators which continues to be an important and real-time mover in the market-of-things, but also one of the few places where experimental and influential work untouched by commodity can be acquired.