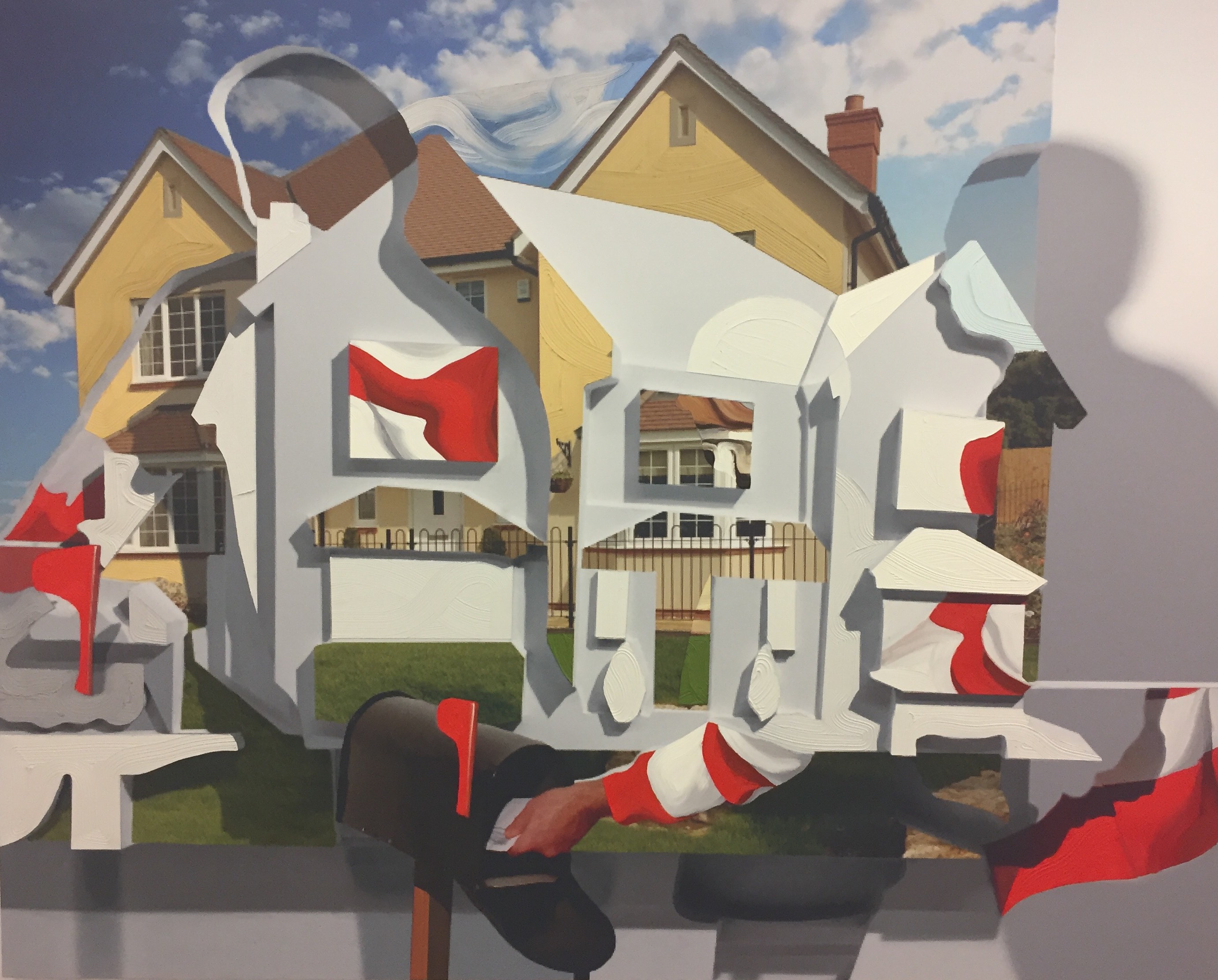 Pieter Schoolwerth’s new show, Model as Painting, at Miguel Abreu Gallery in New York is a strange and intoxicating journey into the chaos of the mundane, or perhaps the mundanity of chaos — either way, a delicious exploration of art and humanity existing in the current digital landscape.

The physical pieces are feats of ingenuity if nothing else, and the viewer is certain to do multiple double-takes throughout the show.  In the pieces, flat human silhouettes overlap and contain one another, resembling a series of carefully layered paper cutouts, their shadows cast upon one another, making the flat silhouettes seem eerily three-dimensional in a headache-inducing labyrinth of figures.  But wait, time for the double-take: some of the pieces actually are three-dimensional, sculptures mounted on the wall that look exactly like their painted counterparts until the viewer gets close enough to realize they aren’t paintings at all, but rather literal projections casting actual shadows.

Turn the corner and the paintings-cum-sculptures have become a full-scale installation, the human silhouette now a pop-out cut into the wall of the wooden cubist room constructed by the artist.  What is especially delightful about this show, besides the play with basic optics and mediums, is the installation is actually used as a part of the set for the short film – Casting Agent – which plays in a room at the front of the gallery.  In the short film, ghostly digital figures that are mere see-through silhouettes, one a casting agent, another a model, enter a kind of rabbit-hole through a trap-door that is apart of the installation the viewer is about to see or just saw.  The figures play and pose, mumble to each other through oversized abstract phones, and the figure that is presumably the model at one point removes her splatter-patterned shirt, which the viewer will recognize as the fabric draped over the stool in the installation.

By organizing the show this way — using the installation as a set for the short film — the artist pulls the unwitting viewer directly into the work, much like the figures in the film enter the secret trap-door in the installation and presumably shrink (in the physical installation, the human cutouts go from gargantuan to tiny, toy-like silhouettes).  Two of the cutouts in the installation (the two characters from the film?) are attached to the wooden walls they leap from by hinges, a complex suggestion to the viewer to enter the artist’s wonderland, but also that these characters are affixed to this representation, that they can leap but never leave.

The colors are a study in the banal: the usual grays, of course, but the strangely 80s after-school-special pastels are the unmistakable palette of countless outdated waiting rooms — one piece is actually titled “Waiting Room,” — and the fit-the-right-shape children’s toys that use the same recurring silhouettes which sit upon the presumable trap-door are reminiscent of toys in said waiting rooms.  Is the waiting room our current moment, and the paralyzed figures us, irreversibly absorbed into the dominating network of the Digital Revolution?  If we must wait, the artist seems to suggest, we might as well play.