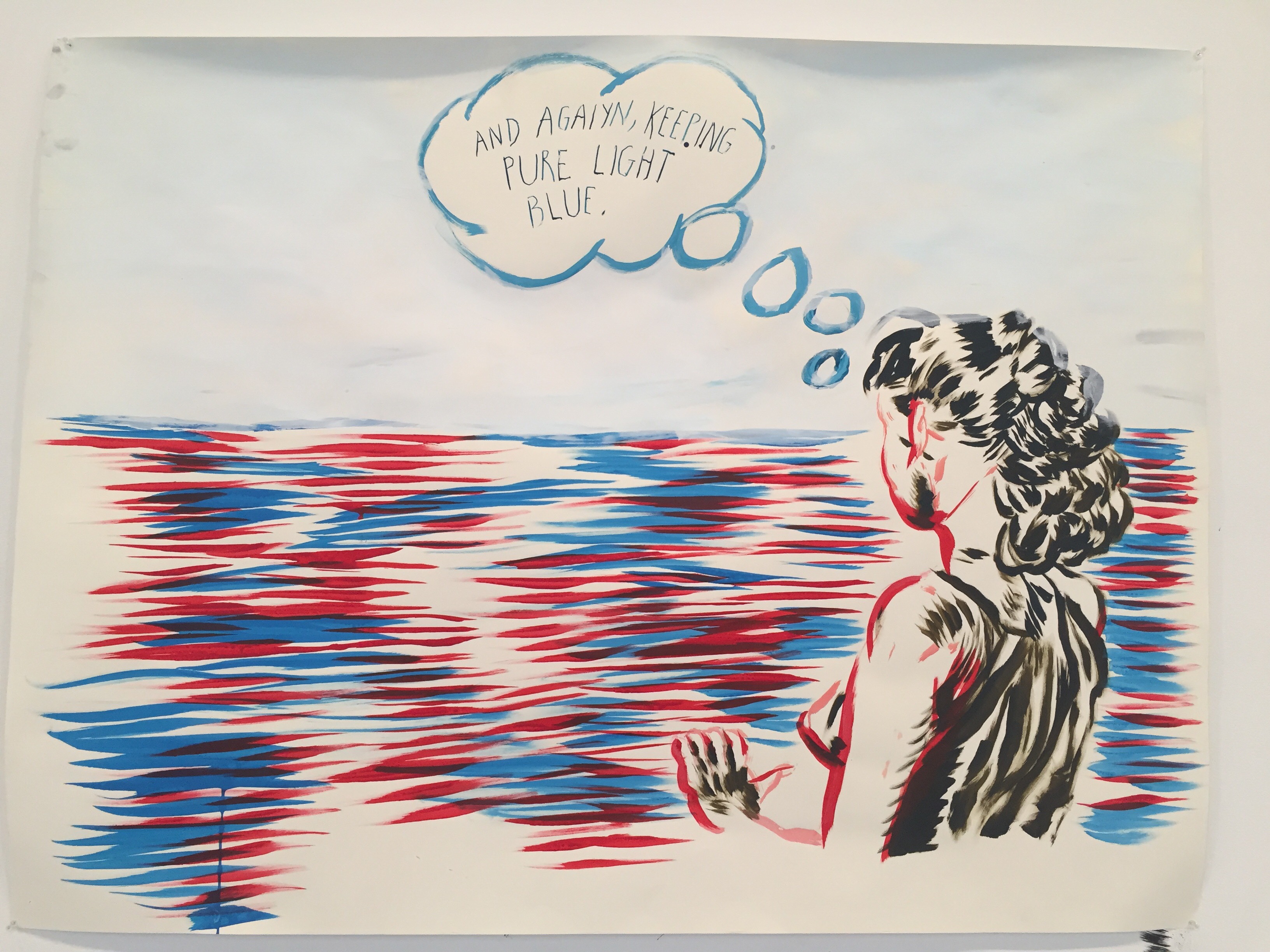 The Raymond Pettibon show at David Zwirner is a whirlwind of work.  Occupying the interesting gallery space that feels a bit like a garage — something of a gigantic inside/outside warehouse — the sheer mass of large-scale ink drawings is impressive on its own.

The references and subject matter are legion.  With quick slashes of ink, Pettibon bounds from violence to humor, from vibrant color to pictures drawn only in black, from childlike animals to cryptic anatomy.  The one thing that unifies the pieces are the strangely enticing poems with Pettibon’s characteristic spellings (adding Ys to words, mostly), which call attention to the fact that he’s using words in the first place.  Where one expects a cheeky comic book narrative, something similar to a Lichtenstein, the viewer instead finds themselves absorbed into a rabbit-hole of words that sometimes don’t inform the imagery at all.

The juxtaposition of pieces seems as much a part of the story as the pieces themselves.

There is a particular interest in the human form, which seems appropriate for a medium closely associated with comics and graphic novels.  There is a blatant homoeroticism to some of Pettibon’s drawings, which feels like a comment on the male-oriented audience for comics, as well as the embracing of a punk-rock devil-may-care attitude.  In one such picture, three young men with quickly-rendered faces and bodies stand in a friendly row, exposing their genitalia proudly and gamely meeting the eye of the viewer.  The casualness of their stance mingling with the boldness of the gesture as well as the mundaneness of the male member all mix together for a kind of incredible counter-cultural moment.

The juxtaposition of pieces seems as much a part of the story as the pieces themselves.

Just beside the drawing I’ve just described is a much larger rendering of the inside of a cathedral, with a looming cross and long, elegant brushstrokes in a myriad of different colors to create the pillars and arches of a classic Gothic cathedral.  This is above a drawing of a bright green frog with its tongue out, and another of a trio of beer bottles more or less exploding as they are slammed together for a toast.  The disjointedness is both dizzying and delightful, feeling like a carnival ride through the fractured imagery of the artist’s wandering mind.

And yet it feels as if there were a story being told, or perhaps dozens of stories and we’re seeing only snippets of each one.  You could spend hours at the show reading the poems alone, piecing together the images as if they were pieces of a puzzle.  The characters rendered here seem to yearn to tell us something, and yet their words become lost in translation, the artist does not allow us clarity.  We are forced to make the connection ourselves, as we are every day in our own muddled attempts at making ourselves understood to each other, out there, in the world.

On view until June 24th